Over the past academic year History Department faculty and graduate and undergraduate students received numerous grants from Emory’s Halle Institute for Global Research. View the History Department awardees and their projects below, and see the full list of Halle grant recipients from across Emory’s campuses.

The Emory News Center’s Leigh DeLozier recently featured Dr. Clifton Crais, graduate assistant Georgia Brunner, and several students from his “Making of Modern South Africa” class. Crais, Brunner, and the students share their perspectives on finding success in the online transition. Read an excerpt from the article below, along with the full piece: “Classes that click: The making of modern South Africa.”

What’s one lesson you’ve learned during this transition, and how will you use it later?

Crais: The importance of human contact and our common humanity, beginning with the simple act of looking into another person’s eyes. I will renew my effort to develop a unique relationship with each and every student, no matter how large the class. Paradoxically, online teaching has taught me the importance of a residential college experience. We are learning new things about the world and about each other. We are going to come out of this crisis better teachers and better students – and citizens.

4th-year doctoral student Hannah Abrahamson was recently awarded a Beveridge Research Grant from the American Historical Association. Abrahamson is a historian of colonial Mexico writing a dissertation entitled, “Women of the Encomienda: Households and Dependents in Sixteenth and Seventeenth-Century Yucatan, Mexico.” The Beveridge grant supports research in the history of the Western Hemisphere (the United States, Canada, and Latin America).

Emory University will extend spring break until March 22, after which the institution will transition to remote learning for graduate and undergraduate classes. Visit Emory’s COVID-19 page for details about these changes, and please contact History Department faculty and staff via email with individual questions or concerns. History Department staff and faculty will work remotely for the next several weeks.

All History Department seminars, workshops, and book events have been canceled for the remainder of the semester, including the History Department Workshop scheduled for this Friday, March 20, featuring Dr. Thomas D. Rogers and Dr. Jeffrey T. Manuel, and the celebration of Dr. Sharon Strocchia’s recently-published monograph, Forgotten Healers: Women and the Pursuit of Health in Late Renaissance Italy, slated for next week. In lieu of the in-person events featuring these works, check out two recent posts about them:

Faculty, students, and alumni from the Emory History Department were well represented at this year’s American Historical Association meeting in New York City. Scroll through the images below for a glimpse at some of the Emory historians at the AHA. 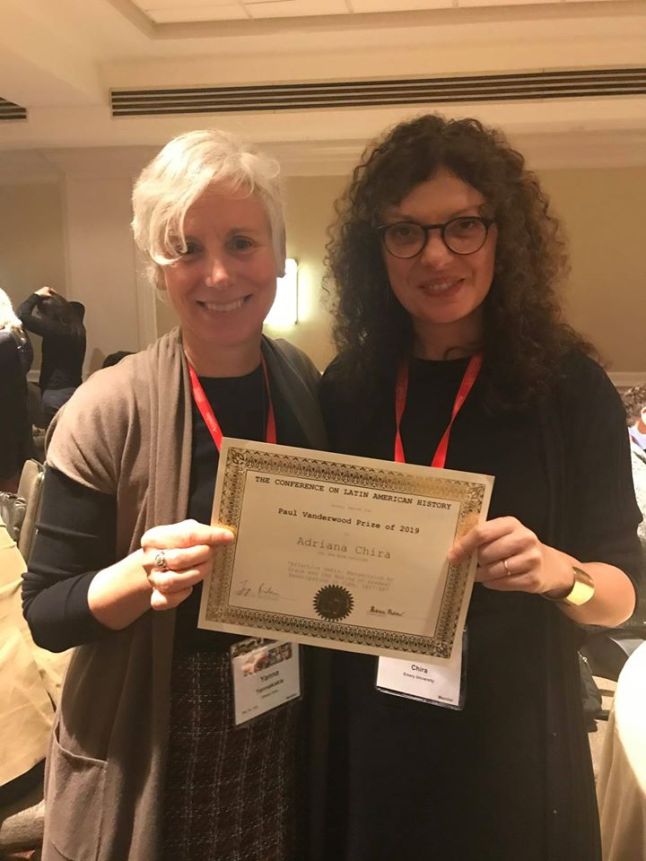 Prof. Adriana Chira (right) was honored with the Paul Vanderwood Prize of 2019, awarded by the Conference of Latin American History for the best English-language article on Latin American history published in a journal other than the Hispanic American Historical Review and the Americas. Prof. Chira is pictured here with Prof. Yanna Yannakakis. 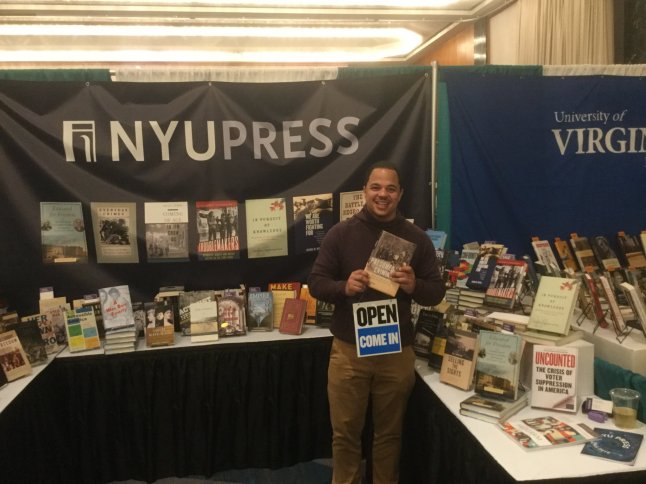 Dr. Joe Crespino on his way to a Saturday morning panel.

Emma C. Meyer and Rebekah Ramsay were part of the panel “Forging Citizenship after Empire: Reflections from Asia and the Middle East in the 20th Century”

Andrew G. Britt (PhD 2018, now at University of North Carolina School of the Arts) and Danielle L. Wiggins (PhD 2018, now at Caltech) presented on the panel “Planning, Difference, and Dislocation in the Black Americas: Atlanta, Port-au-Prince, and Sao Paulo”

Julia Lopez Fuentes presented her paper “Conflict and Fragmentation within the Europeanist Opposition to the Franco Regime, 1962-68” as part of the panel “Tolerating Totalitarianism: Why did the Franco Dictatorship survive?”

This year Dr. Kristin Mann retired from the Emory History Department after a long and accomplished career. The Laney Graduate School has launched a special initiative to honor Mann’s legacy. The Mann Prize in African Studies will be awarded to an outstanding graduate student whose work and commitment to African Studies embodies the career of Kristin Mann.
To name this award in honor of Dr. Mann, we must raise $12,500. If we are unable to reach this goal by December 31st, 2019, the funds will be allocated for general unnamed awards in African Studies. Please consider making a gift to honor the legacy of Dr. Kristin Mann and support African Studies graduate education in the Laney Graduate School at Emory.
Contribute to the establishment of the Mann Prize on the Emory Online Giving website. In addition, read more about Dr. Mann’s career on her Emeritus Faculty profile and in the text below, written by Clifton Crais, Professor of History and Director of the Institute of African Studies.

“After coming to Emory University in 1979, Professor Mann helped create the Institute of African Studies, which she directed from 1993 to 1996. The Institute is one of the country’s oldest and most dynamic centers of Africanist scholarship. Professor Mann was very active in creating the Women’s Studies Program, now the Department of Women’s, Gender and Sexuality Studies. Professor Mann was also instrumental in bringing to Emory University the African Studies Association (ASA), the world’s largest organization devoted to the study of Africa, and in creating the nationally-ranked Ph.D. program in African History. Between 2008 and 2011, Kristin chaired the Department of History. A model citizen, Professor Mann has been active throughout Emory University, including the President’s Committee on Undergraduate Education, the Faculty Council, and the University Senate. A dedicated mentor and a meticulous reader, Professor Mann has advised generations of students, at Emory and around the world. The Mann Prize honors her commitment to students, her collegial spirit, and her enduring contributions to African Studies.“

Graduate student Stephanie N. Bryan presented her paper “Under the Cover of Savory Vapors: Opossums, Power, and Jim Crow Politics” at the Oxford Symposium on Food and Cookery. The paper addresses the custom of hunting and cooking opossums in the southern USA and its manipulation by early 20th century politicians. The paper subsequently won a commendation by the Sophie Coe Prize committee. The judges praised the paper as “a surprising piece of culinary history” and considered it “well researched and well told.” Read the full judge’s report here. Bryan’s advisers in the History Department are Allen Tullos and Patrick Allitt.

Graduate fellow Alexander Cors recently published a blog post on the promises and practices of digital humanities for the interdisciplinary online community HASTAC. Cors’ principal research concerns the Mississippi Valley and Atlantic World, however his work with digital humanities has ranged from 3D visualizations of 1930s Atlanta to mapping legal networks of indigenous communities in New Spain (Mexico). Cors is currently one of the HASTAC Fellows at Emory’s Fox Center for Humanistic Inquiry Read the full post here: Doing History from the “Skies.”

Graduate student Shari Wejsa recently authored a post on grant writing and digital projects for the interdisciplinary online community HASTAC. Wejsa is currently one of the HASTAC Fellows at Emory’s Fox Center for Humanistic Inquiry. Her research centers of modern Brazil and the Lusophone world, and her dissertation is titled, “Migrant Agency and Racial Identity: Angolan Refugees and Immigration Policy in Brazil, 1974-1988.” Read an excerpt of her post below, along with the full article here: “Grant Writing and Digital Projects.”

“Ode to the beloved grant application–being forced to engage in that awkward dance of showcasing your brilliant project proposal while featuring why you, with all of your skills and experience are the ideal candidate to execute your project without gloating too much or simply regurgitating your CV in narrative form. Though most seem to sigh and groan when thinking about grant applications and find excuses to work on any other looming deadline, some have to enjoy developing and fine-tuning them, right? Maybe? Any takers?”