Dr. Carol Anderson recently contributed to an ABC News piece about Donald Trump’s description of the House impeachment inquiry as a lynching. Anderson, who the article quotes as “shocked and appalled” by Trump’s tweet, responded on Twitter:

You weren’t castrated & forced to eat your genitalia like Claude Neal. You weren’t dragged behind a car, doused w/gasoline & set on fire like Cleo Wright. You weren’t blow torched until your eyes popped out of your head like John Jones. That’s lynching. You get due process.

Anderson provided additional historical context for ABC News article, “Trump’s reference to lynching resurrects painful chapter in US history: Experts.” Anderson is Charles Howard Candler Professor of African American Studies, Chair of African American Studies, and Associated Faculty in the History Department. Read an excerpt from the article below along with the full piece.

“Anderson noted that the majority of lynchings happened during Reconstruction — just after slaves were freed — through the rise of the Jim Crow era laws which codified racial segregation. The acts, which even continued through the civil rights era into the modern age have been used as a way to terrorize black people “back into their place” now that they were no longer enslaved, Anderson said.

“‘How do you put them back into a neo-slavery place? The Jim Crow laws were one mechanism, outright massive domestic terror was the other mechanism,’ Anderson said.” 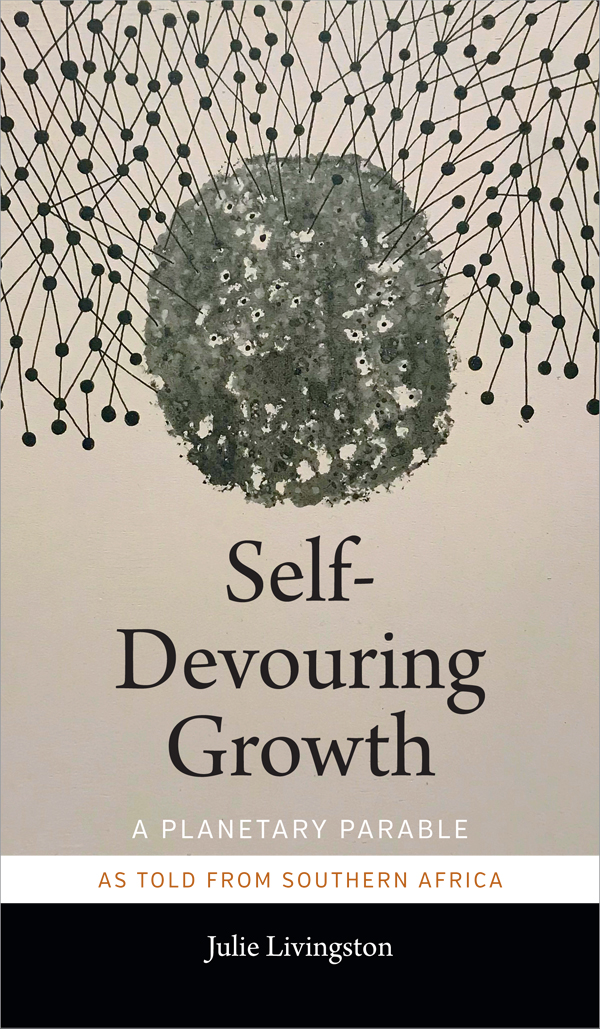 Dr. Julie Livingston, Julius Silver Professor at New York University, recently published Self-Devouring Growth: A Planetary Parable as Told from Southern Africa with Duke University Press. Livingston was the first student to receive the PhD in African History from Emory in 2001. In 2013, she received a MacArthur Fellowship from the John D. and Catherine T. MacArthur Foundation. Her work sits at the intersection of history, anthropology, and public health. Read Duke UP’s summary of Self-Devouring Growth below and see her other work on Livingston’s NYU faculty profile page.

“Under capitalism, economic growth is seen as the key to collective well-being. In Self-Devouring Growth Julie Livingston upends this notion, showing that while consumption-driven growth may seem to benefit a particular locale, it produces a number of unacknowledged, negative consequences that ripple throughout the wider world. Structuring the book as a parable in which the example of Botswana has lessons for the rest of the globe, Livingston shows how fundamental needs for water, food, and transportation become harnessed to what she calls self-devouring growth: an unchecked and unsustainable global pursuit of economic growth that threatens catastrophic environmental destruction. As Livingston notes, improved technology alone cannot stave off such destruction; what is required is a greater accounting of the web of relationships between humans, nonhuman beings, plants, and minerals that growth entails.  Livingston contends that by failing to understand these relationships and the consequences of self-devouring growth, we may be unknowingly consuming our future.”

John Thabiti Willis (PhD, 2008) published Masquerading Politics: Kinship, Gender, and Ethnicity in a Yoruba Town with Indiana University Press in 2017. Willis’ book is a finalist for the African Studies Association Book Prize, the premier award given by the association.  The book stems from Willis’ 2008 dissertation, “Masquerading Politics: Power and Transformation in a West African Kingdom.” Professor Emeritus of History Kristin Mann was Willis’s advisor.

Willis is Associate Professor of History and Director of Africana Studies at Carleton College.  Read the summary of Masquerading Politics from Indiana UP below.

“In West Africa, especially among Yoruba people, masquerades have the power to kill enemies, appoint kings, and grant fertility. John Thabiti Willis takes a close look at masquerade traditions in the Yoruba town of Otta, exploring transformations in performers, performances, and the institutional structures in which masquerade was used to reveal ongoing changes in notions of gender, kinship, and ethnic identity. As Willis focuses on performers and spectators, he reveals a history of masquerade that is rich and complex. His research offers a more nuanced understanding of performance practices in Africa and their role in forging alliances, consolidating state power, incorporating immigrants, executing criminals, and projecting individual and group power on both sides of the Afro-Atlantic world.”

Jason Morgan Ward, Professor of History, recently wrote an opinion piece for CNN.com, titled “The horrendous message behind Trump’s ‘lynching’ tweet.” The article offers critical perspective on a recent Trump tweet that compared the House’s impeachment inquiry to lynching. Ward discusses actual historical lynchings along with politicians before Trump who have appropriated the rhetoric of lynching for their own (most often demagogic) ends. Ward is, most recently, the author of Hanging Bridge: Racial Violence and America’s Civil Rights Century (Oxford University Press, 2016). Read an excerpt from the CNN.com piece along with the full article: “The horrendous message behind Trump’s ‘lynching’ tweet.”

“By co-opting the word “lynching” to mean anything unpleasant or objectionable, and deploying the term for political expediency or more dangerous ends, the speaker, writer, or, in this case, the tweeter, diminishes lynching’s power in American history.

Worse still, claiming the identity of a lynching victim is an outrageous distraction from and diminishment of the suffering of the many thousands who died at the hands of bloodthirsty mobs—spurred, in many cases, by the racial demagogues of that day. We honor their memory by saying their names; we debase their brutal, shameful treatment by claiming to be them to glibly score rhetorical points.”

Marni Davis (PhD ’06) co-authored an article in The History Teacher on how to teach students about the importance of the footnote. In the piece, which is co-authored with Jill E. Anderson, they write: “Footnotes offer a crucial window into historians’ methods of building an argument and using evidence.” Davis is a historian of ethnicity and immigration in the United States and Associate Professor at Georgia State University. Read the full article, “Follow the Footnote.”

Former History major Marissa Zampino graduated from Emory College in 2019. Below she offers an update on professional life following graduation, including a return to Atlanta through the AmeriCorps VISTA program. Read Zampino’s update below, and if you are an alumnus with news to share, please write to us at history@emory.edu.

“I am back in Atlanta and working at Morehouse College through an AmeriCorps VISTA program.  My service site is a division of the Morehouse Bonner Office of Community Service called the Morehouse College Community Revitalization Initiative (MCCRI).  We primarily run educational programs every week at elementary schools in the West End and Westview, but we are also working on a genealogy project.  I also attend monthly community meetings for the Atlanta University Center Neighborhood Association to see how Morehouse can get more involved in the community. I am planning on going to graduate school Fall 2021, but I am debating between a few programs/concentrations to apply to.  I really would like to pursue a PhD in Ethnic Studies or American Studies, but through my AmeriCorps experience I am discovering that I truly enjoy community activism and educational/public policy.”

Dr. Alison Collis Greene recently discussed her book No Depression in Heaven: The Great Depression, the New Deal, and the Transformation of Religion in the Delta (Oxford University Press, 2015) on the Monthly Review podcast Money on the Left. Greene is Associate Professor in the Candler School of Theology and Associated Faculty in the History Department. Read the summary of the episode below and find both the audio and transcript at “No Depression in Heaven with Alison Collis Greene.”

In this episode of Money on the Left, we speak with historian Alison Collis Greene about her book No Depression in Heaven with an eye toward contemporary debates around the Green New Deal. Subtitled The Great Depression, the New Deal, and the Transformation of Religion in the Delta, Greene’s book critiques what she calls the “myth of the redemptive depression” which, particularly in the American south, eroded the legacy of the original New Deal by affirming regressive fantasies of self-help and individualism.

Many on the left today see the “New Deal” framing of contemporary social and ecological politics as a concession to liberal nostalgia. However, No Depression in Heaven reminds us that right-wing and religious dismissals of the New Deal played a key part in rolling back government provisioning under neoliberalism. From our perspective, then, the original New Deal remains a crucial rhetorical battleground for the future of American political economy.

In early December 2019 leading scholars of the African diaspora and slavery will gather at Emory University for a conference entitled “Archival Lives.” The conference is organized by Adriana Chira (Assistant Professor, History), Clifton Crais (Professor, History and Director, African Studies), and Walter C. Rucker (Professor, History and African American Studies). The History Department is a co-sponsor of the conference, which will feature multiple current and emeritus faculty along with PhD program alumni. Read more about the event on the website for Emory’s Institute for African Studies: “Archival Lives Conference.”

Dr. Joseph Crespino, History Department Chair and Jimmy Carter Professor of History, was recently a featured guest on Georgia Public Broadcasting’s show Political Rewind. The special edition show, which is hosted by Bill Nigut, was titled “Our Polarized Politics, How Did We Get Here?” Read a summary of the show below and listen to the full conversation at GPB’s Political Rewind.

Efforts to impeach a president may reveal the deep partisan divide that cleaves our country in two, but the growth of political polarization began long before Clinton and Trump came on the scene.

Today, we’ll look at key moments in American history that revealed the sharpness of our partisan divide, and propelled it forward.”

Congratulations to Dr. Astrid M. Eckert on the publication of her book West Germany and the Iron Curtain: Environment, Economy, and Culture in the Borderlands with Oxford University Press. The book takes a fresh look at the history of Cold War Germany and the German reunification process from the spatial perspective of the West German borderlands that emerged along the volatile inter-German border after 1945. It also provides the first environmental history of the Iron Curtain. Dr. Eckert is Associate Professor of History.