Dr. Mary L. Dudziak recently wrote a piece for The Hill arguing for access to secret documents authored by the Justice Department’s Office of Legal Counsel that govern the scope of U.S. executive power. Dudziak joined other parties in a issuing a formal challenge for the release of this legal corpus, which has been built over decades without substantial oversight (public or otherwise). Dudziak, who is Asa Candler Griggs Professor of Law and associated faculty in the History Department, is the author (most recently) of War Time: An Idea, Its History, Its Consequences (Oxford University Press, 2012). Read the full piece in The Hill: “Shedding light on secret laws governing presidential power.” 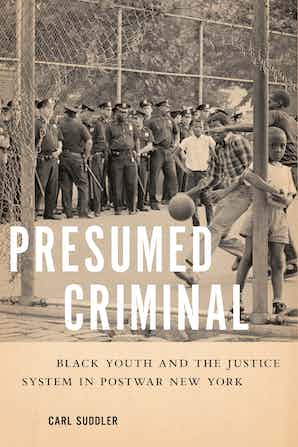 What’s the story behind that compelling cover photo?

[Suddler] “I love the cover image for several reasons. It’s a photo from 1966 Brooklyn. The patrolmen in the backdrop are amongst the 1,500 that were assigned to the neighborhood and, what I often like to point out, is the ‘diversity’ amongst the ranks. There is no information related to the ages of the boys in the image, but you can gather that they are all relatively young, especially the youngster peering out into the camera from the hole in the fence. At its core, however, I feel this image captures the crux of the book – and the heart of the problem today – and that is how normal the over-policing of Black and Brown communities has become. The boys continue to play ball; the officers continue to stand pat. Their proximity does not appear to phase the youngsters. However, we all know too well that increased interactions with the police often lead to increased arrest rates, arrest rates dictate ‘crime’ statistics, and as a country – because we have yet to figure out a better alternative – we rely on crime statistics to make sense of who is ‘presumed criminal.’ Whether or not they committed a crime becomes moot.”

Dr. Lisa Greenwald, an alumna of the History graduate program, was recently interviewed on the podcast of the New Books Network. Earlier this year Greenwald published Daughters of 1968: Redefining French Feminism and the Women’s Liberation Movement with the University of Nebraska Press. She was interviewed by Beth Mauldin, an Associate Professor of French at Georgia Gwinnett College in Lawrenceville, Georgia. Greenwald teaches history at Stuyvesant High School in New York City. Go to the New Books Network website to listen to the podcast.

Dr. Carol Anderson, Associated Faculty in the History Department, recently contributed to a CNN.com article comparing contemporary acts of violence to anti-black lynchings in the twentieth century and before. John Blake authored the piece, “Why El Paso and other recent attacks in the US are modern-day lynchings,” which quotes Anderson extensively. The historian, who is Charles Howard Candler Professor of African American Studies and Chair of African American Studies, draws from her work on lynchings in White Rage: The Unspoken Truth of Our Racial Divide and notes that her uncle was “almost lynched in the early 20th century for standing up to a white man in an Oklahoma store.” Read an excerpt that features Anderson below along with the full article.

“But Anderson and others warn that many of the same elements that spawned the lynching era are stirring once again in America. One commentator even described the El Paso shooter as ‘a lynch mob of one.’

“The result, Anderson says, is that more Americans — Latinos, blacks, Muslims, Jews, anyone not seen as white enough — are now experiencing the same fear of being murdered at random in public that their relatives faced during the lynching era.”

Assistant Professor of History Chris Suh contributed to a recent article published as a part of NPR’s Code Switch series. Josh Axelrod wrote the piece, entitled “A Century Later: The Treaty Of Versailles And Its Rejection Of Racial Equality,” which discusses Japan’s ultimately-rejected proposal for an anti-racist clause in the 1919 accord that ended World War I. Read part of Suh’s contribution below along with the full article.

“‘At the bottom of all of this is the idea that certain people of color cannot be trusted and people of color do not deserve a place, not only on the world stage but also in our own communities,’ says professor Chris Suh who studies Asian American history.

“The rejection of the proposal would play a role in shaping the U.S.-Japan relationship, World War II and Japanese American immigration. It sheds light on the treatment of nonwhite immigrant groups by the U.S. and its legacy of white supremacy.

“‘Basically … there continues to be this sense of racial superiority among the Americans’ toward Japan, Suh argues.”

Dr. Teresa Davis is a Postdoctoral Fellow in Transnational Latin American History in the History Department. She completed graduate school at Princeton University, where she was a colleague of historian Xiyue Wang. Wang was imprisoned in Iran in 2016 while conducting archival research on nineteenth-century nomadic populations of contemporary Central Asia, Russia, Iran, western China and Mongolia. Davis wrote a piece in The Washington Post arguing for increased attention to his research and imprisonment. Read an excerpt below along with the full piece, “Iran has imprisoned a historian for three years. Here’s why his research matters.”

“We should all work tirelessly for Wang’s release. There is no zero-sum equation between fighting to free an innocent researcher in an Iranian prison and advocating for productive diplomatic relations with Iran. Indeed, if diplomacy and sanity are to succeed, we will need to protect the work of researchers such as Wang, who systematically challenge the idea of a foundational clash between East and West, Islam and Christianity, or “backward” and “modern” forms of political organization. To support Wang is to cast our lot in favor of historical nuance and humanity against the hard-liners — both abroad and in our midst.”

Dr. Jeffrey Lesser contributed to a July 30 article in Al Jazeera about a prison massacre in the Brazilian state of Pará that left 57 inmates dead. Lesser is Samuel Candler Dobbs Professor of History and Director of the Halle Institute for Global Research. Read his quote from the article below along with the full piece: “Scores killed in Brazil prison riot; 16 decapitated.”

“The prisons themselves are the opposite of rehabilitation. They are taking young people and making them into hardened criminals and that is in part because Brazil has in some ways an extremely weak state and because the state is weak, the criminal gangs expand.” – Jeffrey Lesser