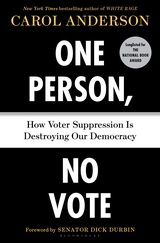 Dr. Carol Anderson, Charles Howard Candler Professor and Chair of African American Studies, has just published a new book, One Person, No Vote: How Voter Suppression Is Destroying Our Democracy (Bloomsbury Publishing 2018). Anderson is Associated Faculty in the Department of History. The Emory News Center profiled Anderson’s new work in a video and article by Kimber Williams: “New book explores history of voter suppression in America.” Anderson is also the author of  White Rage: The Unspoken Truth of Our Racial Divide, which received the 2016 National Book Critics Award in Criticism.

Professor of South Asian Studies Ruby Lal recently published Empress: The Astonishing Reign of Nur Jahan with W.W. Norton. Lal is Associated Faculty in the History Department. The biography charts the ascendance of the empress in 17th Century India and her unprecedented rule over the vast Mughal empire. Read a more detailed description of the book below along with Lal’s recent article about it on the BBC, “The Mughal queen who became a feminist icon.”

Four centuries ago, a Muslim woman ruled an empire.

When it came to hunting, she was a master shot. As a dress designer, few could compare. An ingenious architect, she innovated the use of marble in her parents’ mausoleum on the banks of the Yamuna River that inspired her stepson’s Taj Mahal. And she was both celebrated and reviled for her political acumen and diplomatic skill, which rivaled those of her female counterparts in Europe and beyond.

In 1611, thirty-four-year-old Nur Jahan, daughter of a Persian noble and widow of a subversive official, became the twentieth and most cherished wife of the Emperor Jahangir. While other wives were secluded behind walls, Nur ruled the vast Mughal Empire alongside her husband, and governed in his stead as his health failed and his attentions wandered from matters of state. An astute politician and devoted partner, Nur led troops into battle to free Jahangir when he was imprisoned by one of his own officers. She signed and issued imperial orders, and coins of the realm bore her name.

Acclaimed historian Ruby Lal uncovers the rich life and world of Nur Jahan, rescuing this dazzling figure from patriarchal and Orientalist clichés of romance and intrigue, and giving new insight into the lives of women and girls in the Mughal Empire, even where scholars claim there are no sources. Nur’s confident assertion of authority and talent is revelatory. In Empress, she finally receives her due in a deeply researched and evocative biography that awakens us to a fascinating history.